Make no mistake. Pink Tourmaline is honored to be October’s birthstone. But with all her beauty, grace, and style, she has far greater ambitions. No, she doesn’t want to rule the world. She does want to find her way into every woman’s jewelry chest. And her savvy plan begins by playing to her strength — incredible colors ranging from light purplish or peachy pink to richer fuchsia and magenta. She offers a tempting range of feminine shades that capture subtlety, sophistication, and high fashion with broad appeal to many women’s styles. Her bold ambition requires your cooperation. So create a special place for her in your case and introduce her by name. One look and your customers will fall in love with her.

Tourmaline wasn’t identified as a separate mineral species until the 1800s. Prior to that it was used as a gemstone for centuries but was known by many other names. Green tourmaline was thought to be emerald; blue tourmaline was sapphire; pink and red tourmaline we ruby. With this in mind, it’s no surprise that its name comes from a Singhalese word meaning “mixed or many colored stones.”

It is the American dream: Two young miners walk into a thriving jewelry business that sold only precious stones. They brought fine green tourmaline found at the Mount Mica Mine in Maine. The year is 1875 and the business is Tiffany’s. This particular day, the stars aligned in their favor. They met directly with Charles Tiffany and Tiffany’s resident gem expert, 20-year-old George F. Kunz (he was a Vice President by age 23). Kuntz fell in love with the tourmaline and, true to American style, convinced Charles Tiffany to buy them. Thus began tourmaline’s journey to worldwide appreciation and popularity, and Tiffany’s rise to world leader in introducing new colored gemstones. 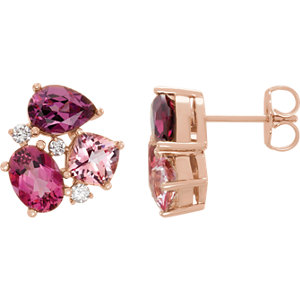 In the 1890s, tourmaline was discovered in the Mesa Grande area of San Diego County, California. The stones were particularly fine pink and red tourmalines. They could surely have sold widely at home or abroad but most flowed to China and in particular, the Chinese Dowager Empress, Tz’u His, who placed her orders through Tiffany’s. Her passion for pink tourmaline knew no bounds and the finest of these pink and red tourmaline were carved or faceted to her liking by her highly skilled stonecutters. Tz’u Hsi died in 1908 and was laid to rest on a pink tourmaline pillow.

All Was Lost — Then Found!

Between 1902 and 1910, Imperial China purchased 120 tons of gem-quality pink tourmaline. Then in 1912, the Chinese dynasty collapsed following the Xinhai Revolution. San Diego miners had grown so dependent on China’s huge demand, their businesses collapsed as well. And that would seem to be the sad ending of a great triumph. After decades, new miners acquired some of the mines believing fine quality stones could be found. Their faith paid off. One mine, Tourmaline Queen, produced stunning world-class “blue cap” tourmaline that combines brilliant blue tourmaline over rich pink tourmaline. The American Museum of Natural History called these gems “the find of the century.” They are extremely rare and hold legendary appeal for collectors.

Today, pink tourmaline is mined in many locations worldwide: Brazil, Madagascar, Afghanistan, Pakistan, Russia, Burma, and a host of African nations including Mozambique, Nigeria, and Botswana. Fortunately you can find them easily in our Black Box Gemstones® and our calibrated gems.

October is Breast Cancer Awareness Month. Jewelry set with pink tourmaline makes a beautiful tribute for all who support a patient, have survived, or are in a fight for their lives.

However good your life is, with pink tourmaline it’s going to be a lot better. Just wear it and enjoy —

You receive all these powers and pink tourmaline’s incredible beauty. Wow! Sounds like a deal to me.