Nordenskjold quickly realized the Perovski’s specimen was too hard to be emerald. That evening, he looked at it again and was astonished to see it was red like a ruby. After further studying its properties, he named it “diaphanite” which means “two unseen and shown” in reference to the color change.

A Name Is Born

It’s generally thought that alexandrite was discovered in 1830 on the birthday of the future Tsar Alexander II and was named in his honor. Not so. It was only after Nordenskjold returned it to Count Perovski in 1834, that Perovski curried favor with the Imperial family by presenting it to the future Tsar as Alexandrite.

Trilling
Emerald is beryl, 7.5 on the Mohs Scale, with hexagonal crystals that can range from small to
several meters long. Alexandrite is chrysoberyl, 8.5 on the Mohs Scale and its only relationship to emerald is its beryllium content. Chrysoberyl crystals are predominantly small. They have a distinctive feature called trilling or cyclic twins. This occurs when three sets of twin crystals are oriented at 120° to each other.

Alexandrite’s strong color change comes from its unusual and rare chemical composition. In addition to traces of iron and titanium, it also has chromium. Chromium strongly absorbs 580 nanometers — that’s super small — of yellow wavelengths thus connecting green and red wavelengths. During the day with the full spectrum of visible light, it appears green to blue green and in the evening with incandescent light, it looks red to reddish purple.

When ground down, alexandrite — like sapphire, ruby, emerald, and many other gemstones — produces tiny white crystals. They are allochromatic meaning their color results from their interaction with light. The interaction depends on the crystals physical shape and its trace minerals. As with chromium, trace minerals absorb different wavelengths those reflected back create the gemstone color.

With its sumptuous color change from blue green topurple red, Russian alexandrite sets the standard by which other alexandrite is judged. There’s only one glitch. Russian resources were pretty much depleted in less than 100 years starting in 1833. Fortunately in 1987, high quality alexandrite reserves were discovered in Brazil. Most of Stuller’s smaller calibrated stones and larger sizes in our Black Box Gemstones® collection come from Brazil. Alexandrite is also mined in East Africa and Sri Lanka.

A fine faceted one-carat alexandrite out-prices ruby and sapphire. Large alexandrites are very rare and those over eight carats often lack the strong color change and hue saturation that makes alexandrite so valuable.

George Kunz (1856-1932) was a major force in American gemology. A native New Yorker, his passion for minerals began at an early age and never left. A self-taught mineralogist, he dropped out of Cooper Union College to pursue his passion. By 20, his voluminous knowledge of gemstones landed him a job at Tiffany’s where he drove the popularity of lesser-known colored gemstones. By 23, he was a Vice President. 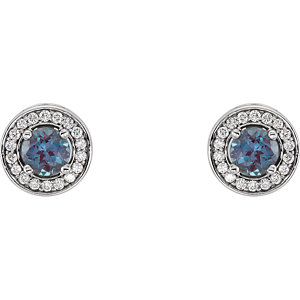 What does he have to do with alexandrite? After seeing a Russian alexandrite, he recognized it beauty and value and was determined to acquire as much as possible for Tiffany’s. Not one to waste time, he traveled all the way to Russia in search of the finest stones. No one knows exactly how long he stayed or how much he bought but Russian Alexandrite soon became a much-coveted star in Tiffany’s realm.

For a “young” gemstone, alexandrite has wasted no time acquiring powers and quite wonderful ones at that. Alexandrite’s powers include:

As I mentioned before, large alexandrite is extremely rare. Large alexandrite with strong color change is even more rare — and hopefully ends up in a museum where people can enjoy seeing these wonders of nature.

Whitney Alexandrite: This 17.08 carat stone from Minas Gerais, Brazil can be seen at the Smithsonian Institution, National Museum of Natural History.

66-Carat Alexandrite: Housed in the Smithsonian Institution, National Museum of Natural History this is the largest known faceted alexandrite. It comes from Sri Lanka.

Fersman Alexandrite Crystals: This specimen contains 22 crystals weighing more than five kilos. It’s in the collection of the Fersman Mineralogical Museum in Moscow.